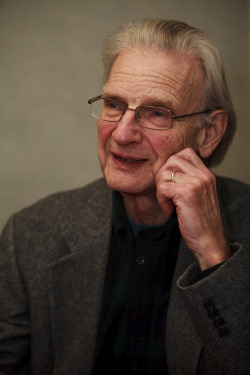 Thomas L. Read, composer and violinist, was born in 1938 in Erie, Pennsylvania. He studied violin, composition and conducting at the Oberlin, New England, Mozarteum and Peabody Conservatories with such noted musicians as Andor Toth Sr., Richard Burgin, Bernhard Paumgartner, Leon Fleisher, and Benjamin Lees. As a violinist he has been a member of the Erie Philharmonic, Baltimore Symphony, Boston Festival Arts and Handel/Haydn Society Orchestras, Vermont Symphony, and the Saratoga Festival of Baroque Music. Following his appointment as Assistant Professor at the University of Vermont in 1967, his innovative series of new music concerts and lectures (Symposium on Contemporary Music, held annually from 1968 until 1991), in addition to his activities as teacher, violinist, conductor and clinician, led to his reappointment as Professor of Music in 1976; Professor Emeritus, 2008. He continues to be active as a violin soloist and conductor as well as a composer.

Over the past three decades he has created a body of music that projects a consistent and distinctive personal style while embracing a variety of New Music idioms and techniques. Critics, while noting its lyrical qualities, have called his music "substantive and meticulously planned, with a wide expressive range leaving a feeling of rich satisfaction." His seemingly free lyrical forms are the outcome of "compositional strategies that engender multidimensional and fascinatingly equivocal emotional states."

Working with many performers and venues, his music has been heard live and through radio broadcasts across the U.S. and in various European cities including London, Amsterdam, Salzburg, Sofia and St. Petersburg. Stations that have featured his music include WGBH, WCBR, WBUR in Boston, KGNU in Boulder Colorado, WVPR and WGDR in Vermont. Organizations and performers who have commissioned and premiered his music include The Vermont Symphony Orchestra, The Vermont Friends of Music, The Social Band, The Vermont Youth Orchestra, The Ukrainian String Quartet, The New England Conservatory Alumni Association, Peabody Junior Conservatory, Sage City Symphony, Royall Tyler Theatre and University Players, The Pittsburgh New Music Ensemble, Vermont Contemporary Music Ensemble, North/South Consonance, The Fleming Museum and Cathedral of St. Paul in Burlington, the Raphael Piano Trio, Craftsbury Chamber Players, Vermont Virtuosi, Bertram Turetzky, Carson Cooman, Mark Nelson, Michael Arnowitt, Paul Orgel, and many others.

As violin soloist has performed throughout the Northeastern U.S. with especially memorable visits to Bowdoin College, Holy Cross College, the Aaron Copland School, Middlebury and Dartmouth Colleges among others. Some of these concerts featured premiers and re-presentation of his own and others works: Don Stewart's Sonatina, Dennis Bathory-Kitsz' Thièle, C.R. Wigness' Sines of Time, Ernie Stires' 12x12, Pärt's Fratres, and Ross Lee Finney's 2nd Sonata are representative.

Over the years he has enjoyed collaborating with Michael Arnowitt, Robert Conant, David Dworkin, David Gibson, Jill Levis, Elizabeth Metcalfe, Sylvia Parker, Evans Wohlforth, and many others, and has performed with organizations and large ensembles including the Festival of Baroque Music at Saratoga, New York, the Festival of American Music at Middlebury College, the UVM Baroque Ensemble, the Vermont Symphony Orchestra (as assistant concertmaster), the Vermont Philharmonic (as soloist), the Woodstock Summer Festival (assistant concertmaster), the Adirondack Festival (Gregg Smith and Margaret Hillis conductors), and, as concertmaster, with the Rutland Messiah Orchestra (annually since 1982), the Oriana Singers, the Dartmouth Symphony, the Burlington Choral Society (since 1988) and the Montpelier Choral Society.

He was one of the fifty founding members of the American Society of University Composers (now the Society of American Composers), and served for a time as Chair of Region I. He helped organize the Vermont Composers Consortium, and is an active member of the American Composers Alliance and a member of BMI. From 1967 to about 1991 a considerable portion of his professional life was devoted to organizing concerts and conducting. In addition to various ad hoc chamber ensembles, he led the University Symphony for two seasons, the Vermont Youth Orchestra for two seasons, pit orchestras for many musicals produced by the University's Royall Tyler Theatre, and he inaugurated an annual Symposium on Contemporary Music at the University with concerts, lectures, discussions and master classes. Symposium guest artists included Henry Brant, Morton Feldman, Stephen Fisher, Jonathan Kramer, Otto Luening, Robert Miller, Gardner Read, Eric Stokes, and Bertram Turetzky. Since joining the University faculty, Professor Read has taught all of the Music Department's theory and composition courses and many literature and genre courses at the undergraduate and graduate levels.

A voracious reader, he haunts the book antiquariats, near and far. For a time, summer teaching involved courses in counterpoint and composition, string workshops and mini-residencies. Now the Spring and Summer months are taken up with composing and, together with his wife, Evelyn, vacation visits with children and grandchildren: Tom, Kathryn and Alex Read in D.C., Jon, Becky and Sam and Megan in Troy, New York, and Benjamin, Deanna and Sarah Read in Buffalo.